Geologist, graduated in 1960 at the University of Florence, his activity spans over applied geology, remote sensing and thematic mapping.

He begins his professional career as a consultant for the Consorzio di Bonifica Montana della Val di Sieve (Sieve Valley Reclamation Consortium). In 1963 he joins the Geomap SA staff, directed by Prof. Enrico Marchesini and is involved in projects aimed at the exploration of hydrocarbons and geothermal energy, carried out with geological and geomorphological studies and with fracture analysis both from field surveys and interpretation of aerial photographs. Subsequently, with the introduction of, new remote sensing techniques, such as terrestrial photogrammetry, satellite and radar imagery and the consequent widening of the fields of application, he participates in several projects with Studio Geologico Geomap (since 1968) first, and Geomap srl (since 1989) later, aimed at the production of thematic mapping for land management, evaluation of environmental impact and geology applied to engineering works (dams, roads, railways).

He has been member of the Geological and Petrographic Mission of the Italian National Research Council in Ethiopia (1969); member of several zoning committees; founder partner of Geomap srl and managing director from 1989 to 1993. Teacher of geomorphologic photo-interpretation in courses and workshops held by Formez and other organizations.

He is charter member of the association “Geologos sin fronteras Italia” and he is registered at No. 35 in the Regional Roll of Geologists of Tuscany since 11/05/1968. 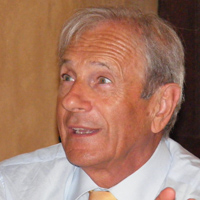